The Day Before the Decision

In San Francisco, rainbow flags littered the city prior to the DOMA decision on June 26. The flags, which represent the gay rights movement, lined significant district streets such as Market, as well as the entire Castro district.

A rainbow flag is caught in the wind, allowing it to wave proudly. Flags are lined across many streets in San Francisco, one of the nation’s largest LGBT communities. Photo: Casey Miller

This flag is one of the many that are attached to poles and wires all across the Castro district. Photo: Casey Miller

A city building stands in the background of a gay rights flag. According to the LGBT community, the flag represents individuality and diversity in the community. Photo: Casey Miller 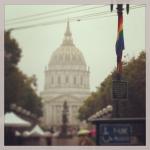 A gay flag waves in front of the Palo Alto city building, representing the battle between the LGBT community and the government. With the SCOTUS ruling, the battle has finally been settled. Photo: Jeff Hara